Toward a Shared Literatures of North and South Korea
North Korean literature revisited through the literary journal, Joseon Munhak <조선문학> 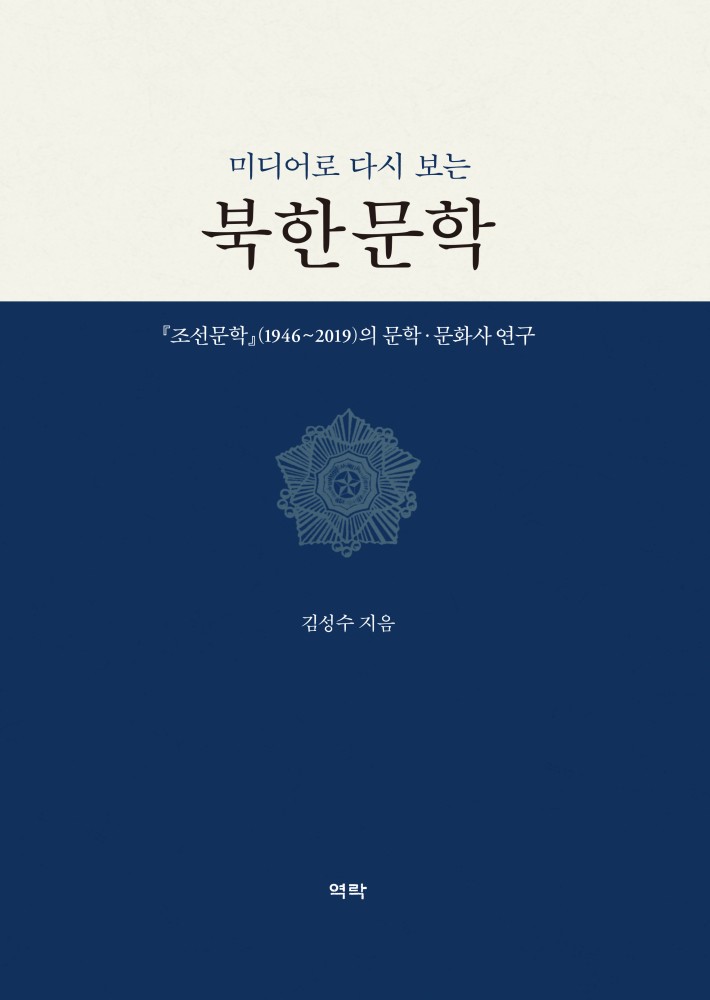 It should come as no surprise that writers in North Korea have been purged and reinstated according to changes in the political climate, and their works have often been deleted or distorted. Whenever literary histories, literature collections, and textbooks are canonized in North Korea, the writers and their works that do not conform to such standards are disqualified. However, literary magazines preserve the texts in their original form before being damaged by canonization, and therefore offer an important resource. In other words, media research can empirically supplement the narrow view arising from the homogeneous discourse of so-called Juche literature. Furthermore, new literary histories can emerge from literary magazines because they provide the basis for the “de-canonization” of canons fixed by the ruling ideology of Juche.

I begin from the premise that “the medium is the message” to approach literary texts by analyzing the media strategies employed in literary journals. As Marshall McLuhan asserts, such a method arises from the expectation that the medium itself enables new ways to read content. With this method of reading media, I examined Joseon Munhak (조선문학 Korean Literature) between the years 1953 and 2019 as the most prominent literary magazine in North Korea, as well as its predecessors, the quarterly Munhwa Jeonseon (문화전선 Cultural Front, 1946), quarterly Joseon Munhak (조선문학 Korean Literature, 1947), and monthly Munhak Yesul (문학예술 Literature Art, 1948~53). This research resulted in the compilation of data associated with the most prominent writers and their works, ranging from bibliographies to thematic specials, covering a total of 866 volumes and 85,000 pages of the literary magazine. Furthermore, I analyzed journal contents that had been overlooked by previous scholarship, such as the tables of contents, advertisements, epilogues, and readers’ columns, examining the editorial styles and media strategies of the journals. 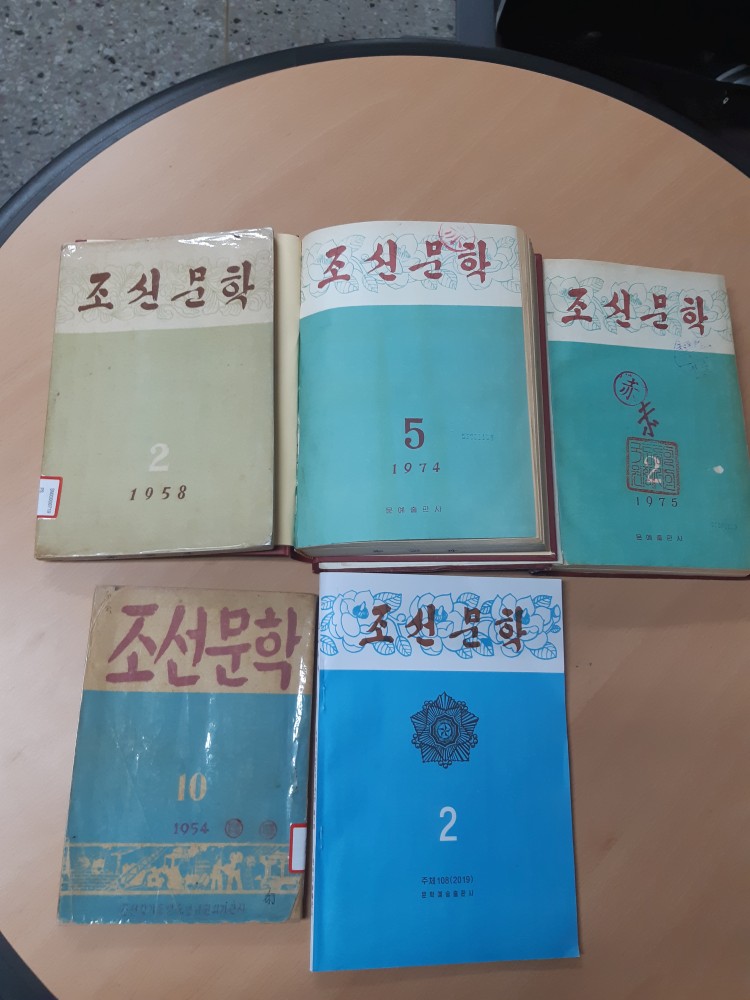 The Media History of Joseon Munhak

Official North Korean historiography draws a linear chronology in the media history of Joseon Munhak from the quarterly magazine Cultural Front starting in 1946 and Literature Art in 1948 to Joseon Munhak beginning in 1953. However, a look at the genealogy of all literary publications from national liberation in 1945 to the Korean War suggest that the aforementioned predecessor magazines were not published sequentially without disruption. In fact, the literary magazines from the immediate postliberation period were largely divided into two types, between those that broadly included literature as part of the arts through publications associated with the Korean Federation of Literature and Arts (조선문학예술총동맹) such as Cultural Front, Literature Art, and Korean Art, and those that dealt specifically with literature through publications associated with the Korean Writers Union (조선작가동맹) such as Joseon Munhak and the weekly Munhak Sinmun (문학신문 Literature News).

This period of seven years in the literature and arts arena from the publication of the quarterly Cultural Front in 1946 to the monthly publication of Joseon Munhak in 1953 was akin to a media battlefield. Indeed, the publication of Joseon Munhak in October 1953 soon after the end of the Korean War was the result of struggle against “remnants of bourgeois aesthetics” from before and after the war. This conflict was related to the purge of literary artists affiliated with the southern branch of the Korean Workers Party (Namrodang), such as Im Hwa, who was editor of Literature Art before the launch of Joseon Munhak and held power over the writers’ organization. Even the total volume number of Joseon Munhak would read No. 101 from the January edition of 1956, incorporating the preceding publications, Cultural Front and Literature Art, as part of its “invented tradition” to rewrite the media history in North Korea.

Much historical insight can be gleaned through just a cursory look at the opening editorial pages, special features, and themed articles of Joseon Munhak, published monthly without interruption for the last seven decades. The journal’s broad historical sweep shows that its editorial direction never veered from its socialist characteristic as the organ of a writers organization affiliated with the party-state. Nonetheless, more or less space would be devoted to delivering party policy and propaganda with an increase in literary materials depending on the editor and the composition of the editorial committee. For example, the journal accurately reflected the historical developments in North Korean literature for each timeline, including debates over formalism triggered in the wake of the second Writers Congress in 1956, debates over socialist realism between the late 1950s and mid-1960s, discussion of “anti-Japanese revolutionary literature and arts” and “Juche literary theory” in the mid to late 1960s, the establishment of the “Great Leader literature theory” in the 1970s, discussions over how to represent the “hidden hero” in the 1980s, and turn toward “military-first literature” during the famine period known as the Arduous March in the mid to late 1990s. In the beginning, special issues of the magazine focused on party policies, literary directions, and commemorations of the party-state, but this changed in the 1970s with Juche literary theory focused on the cult of personality of Kim Il Sung and his successors.

Particularly around the time of the second Writers Congress in 1956, literary outlets had served as venues for active literary criticism and debate as shown by criticisms against formalism. Because the arts was recognized as a relatively special domain, aesthetic diversity and abundant discourses over socialist realism could be maintained. However, in late 1958, the Let a Hundred Flowers Bloom Campaign came under criticism as a rightist bourgeois tendency, shifting toward highbrow dogmatic conveyance of party literature. As a result, editorial personnel running the literary journals with a focus on literature were purged, and their basic function as literary magazines was never restored thereafter.

When Juche ideology became the only acceptable state ideology in 1967, most other literary magazines ceased publication, and only Joseon Munhak remained. Even while it continued to be published, its true function as a literary journal was minimized, vastly strengthening its propaganda function. Consequently, literature came to be dominated by non-literary influences. With this change in editorial style, the content went beyond simply publicizing party policy, but further strengthened the personality cult surrounding Kim Il Sung, Kim Jong Il, and Kim Jong Un.

The current table of contents, main body, and appendix of Joseon Munhak are organized largely into two parts, with “literature in the image of the Great Leader” in the first half and the “socialist realist-themed literature” in the second half. Special issues of literary magazines in the 1950s and 1960s commemorated well-known writers, such as Pak Ji-won, Jeong Yak-yong, Tagore, and Gorky, or anniversaries related to the party and the state. However, since the 1970s, the personality cult have taken greater priority than literature and the party, and special issues shifted to commemorate Kim Il Sung and his “Revolutionary Family.” The cult of personality became so central that an entire issue of the journal was republished when there was a mistaken article about the Great Leader. A congratulatory poem for Kim Jong Il’s February birthday was mistakenly published in the November 1988 issue of Joseon Munhak, and the issue was ultimately discarded. Subsequently, the December issue was published as a combined November-December issue.

Toward a convergence of Korean literary history

This research has led to the creation of a database of the 866 volumes of Joseon Munhak, challenging the official North Korean canon and argument that its literary history was formed in a linear development from socialist literature led by the party to Juche literature. The actual history was much more tumultuous. It was only after the vicissitudes of leftward and rightward shifts of socialist realist literature that the literature of the personality cult took root in the 1970s.

Official North Korean literary history traces a linear evolution from the “invented tradition” of the “anti-Japanese revolutionary literature” during the anticolonial struggle of the 1930s to contemporary Juche literature. Such views were based on literary histories, textbooks, and canons that emerged after the 1970s, but do not accurately represent the literary magazines published earlier from the 1940s (Cultural Front 문화전선, Literature Art 문학예술, Korean-Soviet Culture 조쏘문화) to the 1950s and 1960s (Korean Literature 조선문학, Korean Art 조선예술, Literature News 문학신문, Youth Literature 청년문학, Korean Language 조선어문, Korean Fine Art 조선미술, Korean Music 조선음악) as central parts of the entire literary and artistic media.

A comprehensive examination of the literary media between 1946 and 1967 reveals that writers, their works, and critical discourses have been omitted, ignored, and distorted in the process of canonization. However, Im Hwa 임화, Kim Nam-cheon 김남천, Kim Sun-seok 김순석, Yun Du-heon 윤두헌, Yi Tae-jun 이태준, Baek Seok 백석, and others should form pillars in the convergence of literatures from both Koreas. In addition, the literary vestiges left behind by the socialist realist artists who did not align themselves with Juche literature and consequently were purged, including Han Seol-ya 한설야, Han Hyo 한효, An Mak 안막, An Ham-gwang 암함광, Yun Se-pyeong 윤세평, Jeong Ryul 정률, Seo Man-Il 서만일, Kim Chang-seok 김창석, Yi Hyo-un 리효운, Jeon Jae-gyeong 전재경, Shin Dong-cheol 신동철, Hong Sun-cheol 홍순철, and others should be restored. To liberate the literary “exiles” of a divided Korean peninsula, restoration of their literature and their proper recognition are necessary, as they will ultimately lay the groundwork for the convergence of Korean literary history.

Seong-Su Kim is Professor of Writing at Sungkyunkwan University in Seoul, Korea. His major publications include in Korean, Korean Artist Proletarian Federation’s Novel Collection (1988), Literature of Unification, Logic of Criticism (2001), Writing of Frankenstein (2009), A Study on the History of Korean Modern Letter Forms (2014), and North Korean Literature Viewed through Media: A Cultural History of Joseon Munhak (2020). 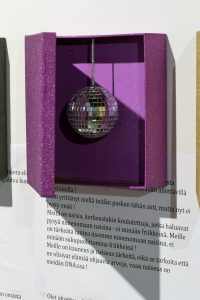 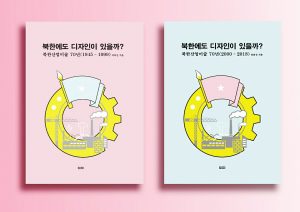 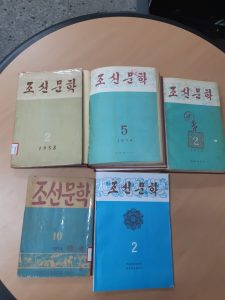 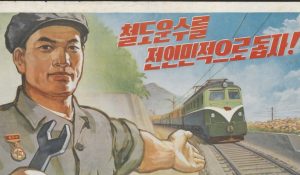 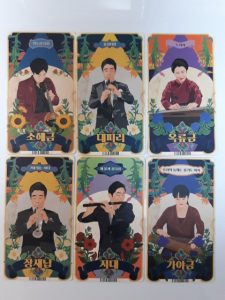 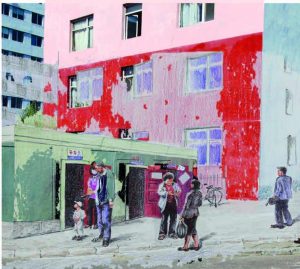