The Use of Poetry in China’s Covid Protests

In late November, mass public protests erupted in numerous Chinese cities following a building fire in Urumchi. Angry citizens and students took to the streets and voiced their anger and frustration against the country’s zero-Covid policy and political censorship. During and in the immediate aftermath of these protests, the overall silence of China’s public intellectuals was worth noting. Given China’s strict media and cultural censorship, in tandem with the backlash against the writer Fang Fang at the start of the pandemic, such silence was probably not so surprising. But this did not mean that literature and culture played no role in China’s public protests. Instead, we witnessed a proliferation of protest slogans, poems, essays, songs, and artworks, most of which were created by ordinary citizens and university students from China and globally. This essay presents some of the poems publicly circulated online and on social media to demonstrate the use of protest poetry in contemporary China.

Amongst all the recent protests in Chinese cities, the one on Urumchi Road in Shanghai was probably the most prominent. This was perhaps a reflection of the symbolic significance of Shanghai in the country’s geopolitics. Arguably, the protest in Shanghai was among the most politically sensitive ones, as some protesters demanded the resignation of Xi Jinping and the end of the one-party rule in China. Shanghai protesters made the link between people’s sufferings in the two cities: Shanghai and Urumchi. On the night of 26 November 2022, a piece of A4 paper was posted on the Urumchi Road sign, and the paper contained an untitled, four-line, hand-written poem: 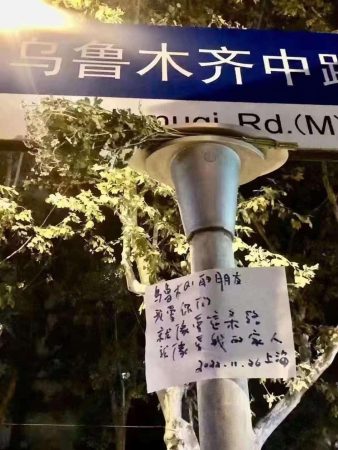 Friends in Urumchi
I love you
Just as I love this road
and my own family members.

Regardless of whether the protesters knew about what had happened in Xinjiang in the past six years, the fire in Urumchi became a rallying point for them to publicly articulate intercity and interethnic solidarity between Shanghai and Urumchi and between the Han majority and the Uyghur minority. Although the poem was taken down from the road sign not long after it had been put up, the picture was uploaded on social media and circulated on the Internet, which continues the poem’s life journey in the subsequent national and global protests.

Holding a blank piece of A4 paper was a powerful symbol of protest against China’s political and cultural censorship in recent events. Blank paper has also been used to write protest slogans and poems on. These poems were often handwritten and anonymous, showing the spontaneous but sensitive nature of the act and the human touch of the protesters and representing the multitudes of ordinary people they represented. The following poem, titled ‘Blank-Paper Youth,’ offers a justification for the use of blank paper in these protests: 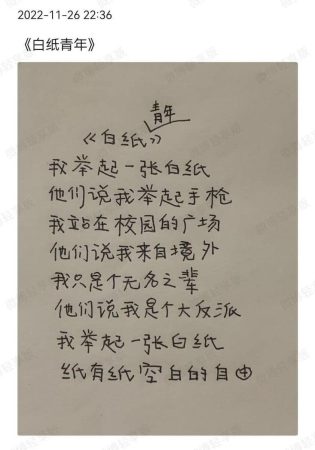 Students from more than fifty Chinese universities and numerous international universities participated in the protests. Protest poetry was used to recruit participants and rally bystander support. The following poem first appeared at the Communication University of China, Nanjing: 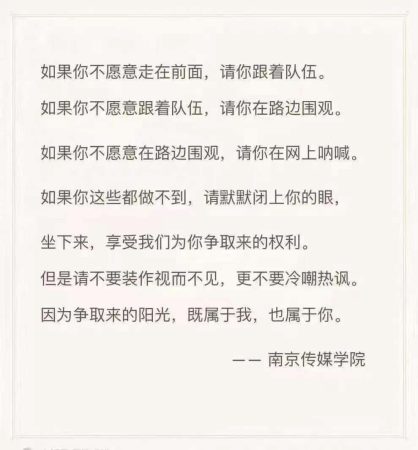 The following poem was first seen at the Northwest University of Political Science and Law in Xi’an, where a student held a placard at a local PCR test station. The poem was subsequently quoted in several candlelight vigils outside China. Its emphasis on the tremendous human cost of China’s stringent pandemic policy was particularly powerful: 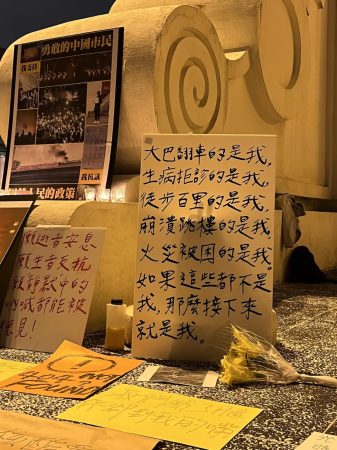 The following poster used for a candlelight vigil has Queen’s University’s name on it. Against a black background and above the picture of a burning candle is an untitled poem: 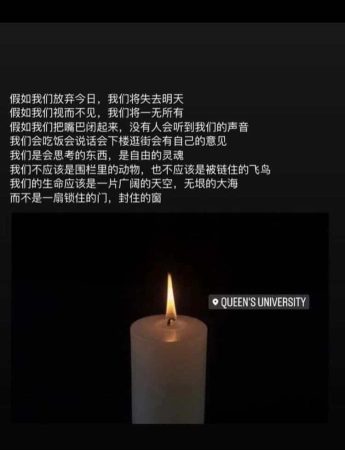 If we give up today, we’ll lose tomorrow.
If we turn a blind eye to everything, we’ll end up with nothing.
If we shut our mouths, no one will hear our voices.
We can eat and speak and go downstairs shopping and have our own opinions.
We’re thinking beings with free souls.
We shouldn’t be treated as fenced animals or chained birds.
Our life should be a broad sky or a boundless sea
and not a locked door or a sealed window.

As we can see from the above examples, selective and incomplete as they are, ordinary people including Chinese citizens and university students have used protest poetry to express their anger and sadness, and rally public and peer support in recent Covid protests in and outside of China. One can perhaps debate on the literray merits of these poems but this does not undermine their social significance. In an age where the public interllectural’s role is often unclear and poetry is often seen as an obsolete, high cultural form, perhaps we should reconsider the importance of interllecturals—in the forms of organic, grassroots or minjian interllecturals—as well as the use of literature in our tulmetous times.

Hongwei Bao was born in China and currently lives in Nottingham, UK. He has published four books on queer Chinese history and culture: Queer Comrades: Gay Identity and Tongzhi Activism in Postsocialist China (NIAS Press, 2018), Queer China: Lesbian and Gay Literature and Visual Culture under Postsocialism (Routledge, 2020), Queer Media in China (Routledge, 2021) and Contemporary Chinese Queer Performance (Routledge 2022). Besides being an academic, he also writes short stories, poems, reviews and critical essays. He writes in both Chinese and English and has translated literary works and film subtitles from Chinese to English. His creative work has appeared in Cha: An Asian Literary Journal, Cuntemporary, Shanghai Literary Review, Room 1000, Soundings, The Conversation, Write On, Words Without Borders and Yishu.

A few years past the first recorded cases of COVID-19, it seems as though we are still in the eye of the storm. This forum features attempts to process how we understand this unfolding crisis that, like the virus itself, continues to mutate and transform.

First Look as Future Look: The Documentary and the Predictive in Wuhan Diary

The Use of Poetry in China’s Covid Protests

The Poetics of Protest

A Record of My Battle with the Virus by Han Song, translated by Michael Berry